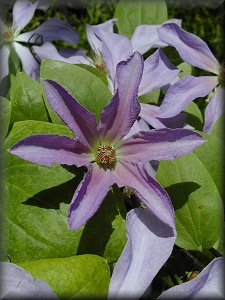 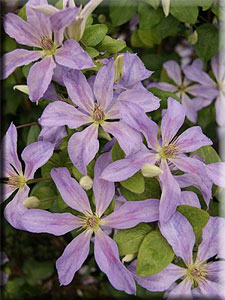 There is considerable confusion over cultivars named 'Gabrielle'; at least two are known and there may even be three.

The Fifth Supplement to the International Register and Checklist 2002 notes that: Brewster Rogerson, USA (in litt.) says that it appeared as a seedling in the late 1960s in the Cape Cod garden of Polly Hill, USA, was propagated by Steffen about 1983 and listed in his catalogue (?date) mis-spelt as ÂGabrielÂ. He notes that what marks this cultivar out is the wide separation of the sepals: Âlike a whirligig without some of the curlÂ. European nurseries vary in how they describe the flower colour, but this seems to be the same plant.
Group: Early large-flowered group
Approximate height: 2.5 - 3.0 metres
Flowering period(s): May Jun Sep
Aspect: Any aspect
Pruning: Light prune (Group 2)
Raised by: P Hill
Country of origin: USA
Date raised: rn1968 i1983
Parentage: Unknown
Other name(s): 'Gabriel'. Mis-spelling: 'GabriÃ«lle'