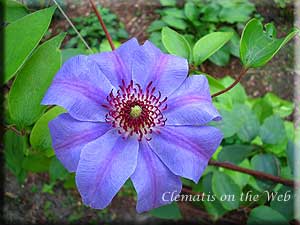 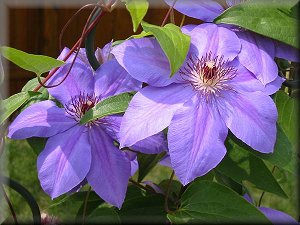 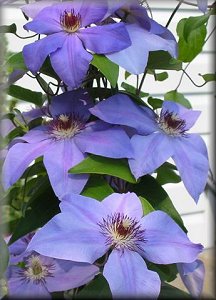 Photo © 2002 John Lobingier
Large lavender blue flowers with deep red anthers. There has been much confusion between 'Ramona' and 'Hybrida Sieboldii' with some authorities listing them as synonymous. The problem goes a long way back and is detailed in Spingarn's famous 1935 article:

Finally, there is the very attractive variety, Ramona, which has often been thought of as an American creation. It is virtually unknown in England, and the few French nurseries that now offer it for sale seem to have obtained their original stock in the United States; indeed, in some of Lemoine's old catalogues, from 1890 onward, it is definitely ascribed to the Storrs & Harrison Company of Painesville, Ohio. It seems to have been first described and illustrated in the Horticultural Art Journal of Rochester, New York, in 1888, where it is called "an American production" raised by Jackson & Perkins of Newark, New York, and is said to be a seedling of one of Lemoine's hybrids, C. lanuginosa candida. The Storrs & Harrison's 1889 catalogue says: "This new Clematis originated at Newark, New York," and the 1893 catalogue of the Jackson & Perkins Company, the earliest I have been able to find, states categorically: "We are the originators of the well-known Clematis Ramona". But the evidence would seem to indicate that this variety, so admirably suited to our soil and climate, is not an American creation; and the Jackson & Perkins Company have recently explained to me that "it came to us without a name, and we (in the absence of any name) named it Ramona.
At least as early as 1893 Ramona was regarded as a synonym of a Dutch variety Hybrida Sieboldii, for in that year J C Vaughan of Chicago listed in his catalogue "Sieboldii (Ramona or Boskoop Seedling). An extra fine variety of the patens type; flowers very large, of a beautiful lavender shade." Hybrida Sieboldii was raised by B Droog, a nurseryman of Boskoop, Holland, in 1874, by crossing C lanuginosa and C patens; it was first described in a Dutch periodical, Sieboldia, in 1875, and a rather pallid colored illustration of it appeared in another Dutch publication Nederlandsche Flora en Pomona in 1878. It is still grown under its original name in Holland, where it is generally regarded as identical with Ramona. It was soon imported into the United States, and as early as 1885 Peter Henderson & Co of New York listed "Hybrida Sieboldia (Boskoop Seedling), lavender." It is probably this variety, or possibly some other foreign hybrid, which the Jackson & Perkins Company, adopting the title of a popular American novel published in 1884, renamed Ramona and distributed about 1888. The new name soon superseded the older one, although Bobbink & Atkins continued to list "Hybrida Sieboldi" until at least 1916. [The] Dutch hybrid has been variously described in Dutch, German, and American nursery catalogues as lavender, lavender-blue, silvery-lavender, blue, velvety clear blue, and deep sky-blue, all of which more or less accurately describe the rather variable forms of Ramona as well.

See the entry on 'Hybrida Sieboldii' for details of the original Dutch breeding.