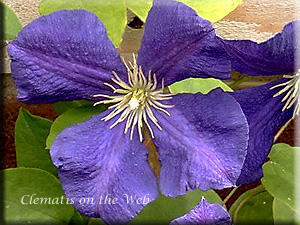 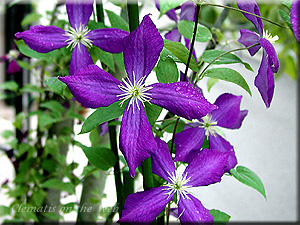 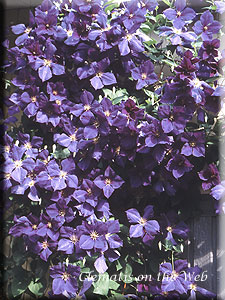 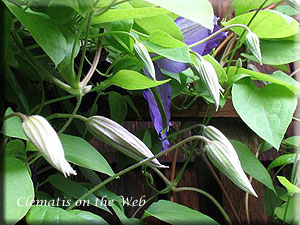 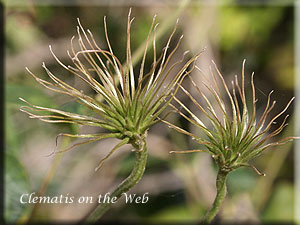 William Robinson, in his book 'The Virgin's Bower' (1912) says "This plant is said by Mons. Lavallée to be a Japanese species and not a hybrid as supposed. It is, in fact, to the botanists, who have collected in Japan, a well known plant." This is quite wrong and, apparently, Jackman's breeding records survive to prove it - but see below.

The photograph by Mike Denny is of an old plant: "a result of cuttings taken over 30 years ago from a 20 year old + plant" which was regarded by Mike's father, Vince Denny, as a definitive example of the cultivar. Tsuyoshi Isojima's photograph is of a 'Jackmanii' as currently available in Japan.

In fact, neither of these forms appears to be the original 'Jackmanii'. Wim Snoeijer, writing for the 2005 edition of the Bristish Clematis Society Journal, notes that today's 'Jackmanii' does not match the description and illustration in The Clematis as a Garden Flower - the definitive work by Moore and Jackman first published in 1872. It does, however, match a herbarium specimen at Kew Gardens dated 1881. It seems likely that the original 'Jackmanii' was lost a very long time ago.