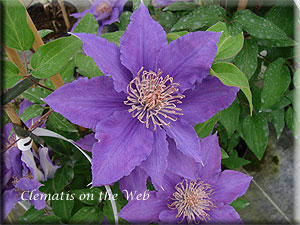 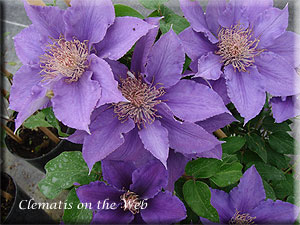 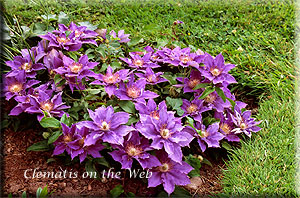 Photo © 2007 Guernsey Clematis Nursery
Medium to large, single, mauve flowers with a slight pink bar. Pink anthers. Publicity photographs would suggest that some early flowers can be semi-double. A member of the Evison/Poulsen® 'Flora' collection released in 2003. It is extremely compact only growing to 30-50cm tall outside and is thus a serious candidate for use in a hanging basket (see photo). According to the Poulsen Roser website, Evipo030 was to have been named 'Thumbelina' but it was launched at the 2004 Chelsea Flower Show under the name 'Bijou'.

Not to be confused with the Barry Fretwell clematis also called 'Bijou'.