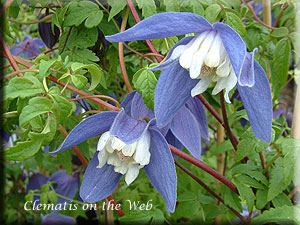 Photo © 2007 Wim Snoeijer
This is the true form of 'Frances Rivis'. Small, nodding, bell-shaped deep blue or mid-blue flowers. White staminodes. The seed from which this form was grown was collected by Mrs F E Rivis in Nepal or Xizang (Tibet).

There is a 'Frances Rivis' sold in France and the UK, known as the 'English form', which has longer, paler blue tepals and which, according to the International Clematis Register and Checklist 2002, is possibly a form of 'Blue Dancer'. The true form, described above, is sometimes called the 'Dutch Form' to help distinguish between the two.