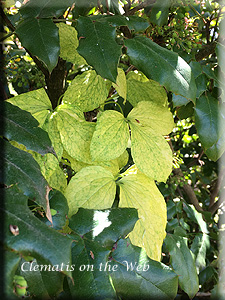 Leaf formation - Photo © 2019 Linda Beutler
The Fourth Supplement to the International Clematis Register and Checklist 2002 notes: "As for the typical species, except that much of the young foliage displays a brilliant yellow/chartreuse variegation: while this can be either absent or complete, usually it affects the leaf lamina, with the network of veins remaining green; by late summer, all lvs revert to green. Introduced from Japan to the USA by Dan Heims of Terra Nova Nursery." The Rogerson Clematis Collection inherited Terra Nova's entire stock of this form in 2007. In 2020 Linda Beutler, the Collection's curator, added this note: "the flowers can have a more typically "japonica-colored" flower if the plant is grown in an eastern exposure where it gets some direct morning sun. A western exposure with strong afternoon sun is to be avoided. In dense shade, there will be more gold in the foliage and less pigment in the flowers. Flowers on old wood. No matter the degree of variegation on the leaves, they turn uniform bright green by late July. Annual pruning is to groom as needed in late winter, removing only dead stems and any of the previous season's leaves still hanging on"
Approximate height: 3.0 - 4.0 metres
Pruning: No pruning (Group 1)
Country of origin: Japan
Parentage: Species
Other name(s): None known