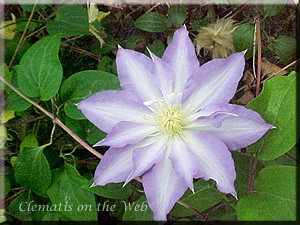 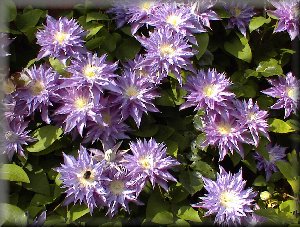 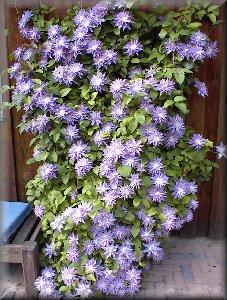 Photo © 2003 Flemming Hansen
Large lilac-coloured double flowers with pointed, wavy-edged tepals in May-June. Single flowers in September. Contrasting creamy-yellow anthers. Another clematis with a fascinating story. This stunning cultivar was discovered by Flemming Hansen, growing on a north wall at a Danish nursery. Having spoken to the nursery owner, Mr. Hansen established that this clematis was obtained from England, at the turn of the century, by the owner's father who was, at that time, trading with England, Germany and Sweden. Attempts to find the original name of this cultivar have, so far, failed. Mr, Hansen has given it the name 'Thyrislund' after the area in which it was found.
Text © 1999 Robin Savill
Group: Early large-flowered group
Approximate height: 2.5 - 3.0 metres
Flowering period(s): May Jun Sep
Aspect: Any aspect
Pruning: Light prune (Group 2)
Country of origin: United Kingdom
Other name(s): None known