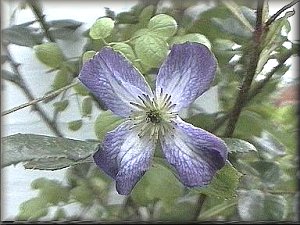 The raiser, Tom Bennett, tells us:

"In the mid- 1980s I sowed a handful of seed from ÂAlba LuxuriansÂ which was growing in my garden in County Durham, UK, close to several dozen other clematis Â including some viticella varieties.

"One of the seedlings looked promising, with bluish margins on the sepals and a reasonably vigorous habit. At around the same time, Colin Brown and I established the Beamish Clematis Nursery so I transferred the potted seedling to the nursery, where we propagated a few more plants, though not in commercial quantities. Looking around for a name, I settled upon ÂFoxtrotÂ Â it was concise and carried on the dance theme begun by ÂMinuetÂ, which this plant resembled in style. We gave some named cuttings to one or two enthusiasts Â the late Vince Denny being one Â but we didnÂt introduce it or register the name, being rather busy with other matters at the time.

"I came out of the fulltime nursery trade in 1992 but Colin continued. At some point, a year or two later, I became aware of a ÂFoxtrotÂ, in commercial circulation, purporting to have originated from Barry Fretwell Â we never obtained a plant but from photos it looked similar to the one I had. It wasnÂt something to make an issue over Â I felt that it was perfectly feasible that a similar cultivar could have been produced, particularly given that Barry Fretwell specialized in the group, and the name was a logical addition to his existing range (he also produced ÂTangoÂ) so I didnÂt pursue the matter further.

"IÂm now told that Barry Fretwell says he didnÂt introduce the ÂFoxtrotÂ, which had hitherto been attributed to him, and Colin has told me recently that he understands that the late Vince Denny appears to have propagated and distributed some from the plant we gave to him so it seems likely that it may have gained currency by this route."