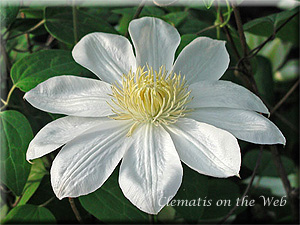 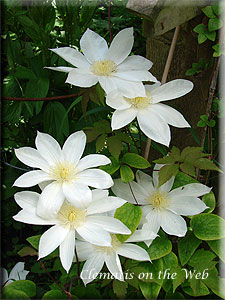 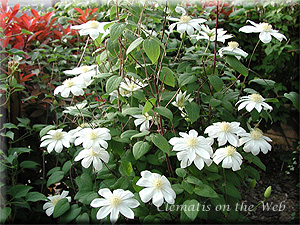 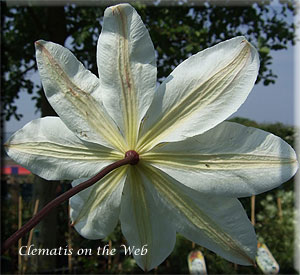 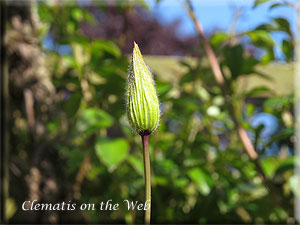 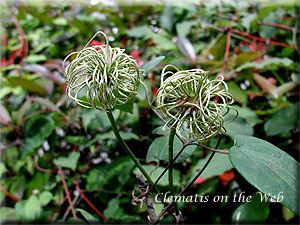 Seedhead - Photo © 2006 Tsuyoshi Isojima
Large, scented, cream-white to pale yellow-green flowers with a darker bar. Pale yellow anthers on white or cream filaments. Originating from Manchuria, or possibly Korea, as 'Manshuu-Ki' (Manchuria Yellow), introduced into Japan in 1933 by the former president of the Japanese Clematis Society, Baron Hirotaroo Hayashi. Introduced into Europe in 1965 by Kiyoshi Wada.

There is confusion in the literature whether 'Moonlight' is the same plant as 'Wada's Primrose' syn 'Yellow Queen'. According to Magnus Johnson in Slaktet Klematis it is not. 'Wada's Primrose' differs by having taller growth, thinner stems, lighter foliage, convex leaflets (not wavy as with 'Moonlight'), lighter flower colour, flatter flower shape, the weaker appearance of the veining on the tepals and a lighter scent. Flower buds on 'Wada' are smaller and less downy; in spring the young growth is not as strongly bronze and on ripening the silky hair of the seed tail has a yellowish colour which does not shine golden as with 'Moonlight'.