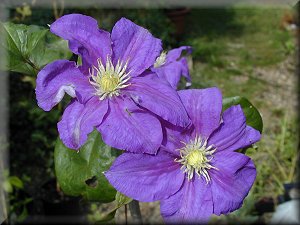 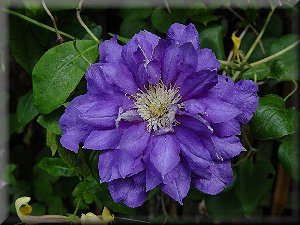 Photo © 2003 Ian Lang
Large, deep blue double or semi-double blooms on old wood in the spring, followed by single flowers on new in late summer. The tepals tend to be paler and slightly redder towards the centre. Creamy-yellow anthers. Described as free-flowering in some catalogues although Toomey & Leeds (2001) specifically note that some clones are not very floriferous. This plant has been awarded the Royal Horticultural Society's Award of Garden Merit.

The photograph, taken in late August, shows the single form.