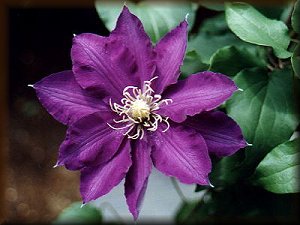 Photo © 2000 T Ozawa
Large purple flowers with lighter bar. Pale yellow anthers on white filaments. Named after a Japanese mountain. The name has sometimes been transcribed from the Japanese as 'Hotaka' leading to confusion as to whether there were two similar cultivars with similar names. The International Registrar has now discovered that they are one and the same.
Group: Early large-flowered group
Approximate height: 2.0 - 2.5 metres
Flowering period(s): May Jun
Aspect: Any aspect
Pruning: Light prune (Group 2)
Raised by: Sakata Co
Country of origin: Japan
Other name(s): 'Hotaka'