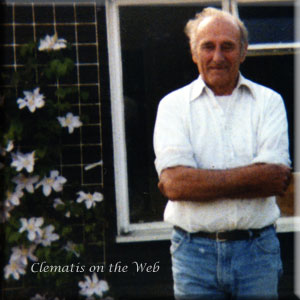 Jim Fisk was born in 1912 and at the age of 14 he left school to go and work in the Notcutts Nursery in Woodbridge, Suffolk, UK. There he learned about horticulture and gained a love of, and experience with, clematis.

He served in the Royal Navy during World War II and when he was demobbed (demobilised) he used the money he received to start his own nursery, Fisk's Clematis Nursery, in Westleton, Suffolk. Jim worked in his nursery for more than 50 years, only retiring and closing the nursery in 1999, at age 87!

Although Jim bred a number of clematis cultivars, he is possibly better known for his many introductions. He established a network of contacts with clematis breeders throughout the world. They would all exchange plants and Jim, using his knowledge and experience, selected the best for further commercial cultivation. The RHS International Register and Checklist 2002 lists nearly 50 cultivars introduced by Jim Fisk. Most are still well known today and now widely available.

Jim's was one of the first nurseries to display clematis at the Chelsea Flower Show, if not the first. He exhibited there for many years and was always commended for the quality of his flowers and the interesting new cultivars he used, winning many awards. He also wrote books on clematis, notably Success with Clematis and Clematis, the Queen of Climbers, as well as an RHS Wisley handbook, Clematis. These are still considered essential reading, even today.

Jim was made an MBE (Member of the British Empire) in 1997 for his "services to horticulture". He was one of the few people to have been made an Honorary Fellow of the International Clematis Society.

Text based, with permission, on an obituary by Ken Woolfenden published with Clematis International 2005. Photographs from the collection of Jim Fisk's great niece, Caroline Passey.