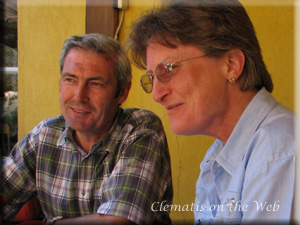 Thorncroft Clematis Nursery was formed by Ruth Gooch and her parents, Dorothy and Geoffrey Tolver, when they moved to an old farm cottage in Reymerston, Norfolk UK, in 1985. Ruth had grown up with a gardening family and so had her husband Jon. As their children started school it was a natural move that the hobby of growing a few plants should become a more serious 'business'.

The move to Reymerston involved selling both Jon and Ruth's house and Dorothy and Geoff's too. That enabled them to buy an extra three acres of land on which to develop the nursery. For a number of years the business was a small 'one woman' band selling a few plants, mainly hardy shrubs, plus some clematis, to a local nursery. The hobby of gardening meant that the garden adjoining the house and nursery became a well stocked display garden where clematis and other plants could be seen in a true garden setting.

It was during this time that the 'collecting bug' bit and having found the proverbial 'gap in the market', all of the family were keen to find and grow more and more clematis. Trips to Jim Fisk in Suffolk, and any other sources were popular, and they joined the newly formed International Clematis Society.

In 1988 the family decided to display and sell a few clematis locally at the Royal Norfolk Agricultural Show. The enthusiasm of the public to buy plants was astounding and convinced Ruth that a specialist clematis retail business was feasible. Her mother Dorothy was about to retire from the John Innes Research Institute and together they opened for business as Thorncroft Clematis Nursery at Easter 1989. Growth of the business was rapid and included Geoff taking early retirement to join the team. After a year or two of experimenting with mail order, Thorncroft was included in a survey by the independent consumer magazine, 'Which?' When the survey was published in 1998 they came out as Best Buy which was just the boost they needed and things became very hectic as mail order grew to become a more and more important part of the business.

Over the years Ruth and Jon had become active members of the International Clematis Society and were amongst the original members of the British Clematis Society when it was formed. Through these two societies they have met and exchanged clematis with countless numbers of nurseries and collectors around the world. Their son Peter joined the business after leaving college and worked for a short while in New Zealand, gaining experience in a number of clematis nurseries there.

Despite all this, Ruth has found the time to write two books on clematis: Clematis: the complete guide (1996) and Clematis: an essential guide (2011).

Thorncroft Clematis is now known worldwide, thanks to Exhibits at Chelsea, Hampton Court Palace Flower Show, BBC Gardeners' World Live and Wisley. The nursery has collected many RHS Gold Medals and numerous Silver-Gilts for exhibits of Clematis. Jon, Ruth and Peter hope to be able to continue displaying their favourite flowers for years to come.