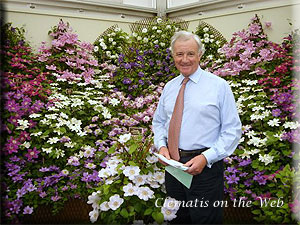 Raymond Evison is the owner of The Guernsey Clematis Nursery Ltd which is the leading producer of young clematis plants in the world. He is also the owner of Raymond J. Evison Ltd which has a joint venture with Poulsen Roser A/S for the breeding and development of new clematis both for indoors and the garden.

Born of a gardening family, Raymond Evison started his horticultural career at the age of 15 in Shropshire where he grew up. He quickly became the Director of his first company: "Treasures of Tenbury Ltd". A brutal winter killed a third of his mother stock and he moved the clematis operations to Guernsey, in the sunny Channel Islands near France, where he set up The Guernsey Clematis Nursery in 1985 to take advantage of the milder climate and the plethora of empty glasshouses where Guernsey tomatoes once grew. The nursery now produces five million young plants each year and exports to 20 countries worldwide. His exhibits at the world famous Chelsea Flower Show have gained him numerous Royal Horticultural Society (RHS) Gold Medals over many years. In 2004 he was awarded the Societys Reginald Cory Memorial Cup for developing new clematis cultivars.

One of Raymond's greatest loves is to search worldwide for plants, either in the wild or in cultivation, and he has been responsible for introducing more than 100 clematis species and cultivars for the world's gardening market. Moreover, Raymond holds an NCCPG Collection of clematis of over 500 species and cultivars.

In 1995 he was awarded the RHS Victoria Medal of Honour (VMH) for his outstanding service to British Horticulture and he was made an Officer of the Order of The British Empire (OBE) by Queen Elizabeth II in 2000 for his services to Horticulture in Guernsey. The Royal Horticultural Society made him a Vice President in 2005, a position which he still holds (2007).

Adapted, with permission, from the Guernsey Clematis Nursery website and from additional material supplied by Raymond Evison