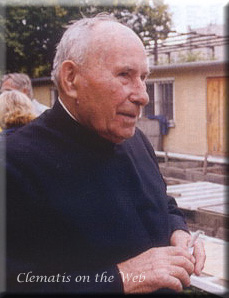 Brother Stefan Franczak was born in 1917 in central south Poland. In 1948, following some time in agricultural training, he decided to join the order of the Jesuits and to serve as a simple monk, rather than to become a priest.

Perhaps not surprisingly, given his background, Brother Stefan was given the task of tending the fruit and vegetable garden at his monastery in Warsaw. Some time later the monastery authorities decided that the land should become a decorative garden open to the public and this became his task. He created a garden containing over 900 varieties of flower - mainly clematis, irises and hemerocallis.

During his involvement with the garden, Brother Stefan became interested in selecting new clematis grown from the seed collected from 'his' plants. (He was also well-known as a breeder of hemerocallis and irises.) Some 67 named clematis cultivars resulted from his work. Brother Stefan had a long history of naming his clematis cultivars by reference to the church or to Polish history.

In March 2003, the monastery authorities were poised to turn the garden to other purposes and to destroy the plants and, with them, Brother Stefan's breeding programme. There was a concerted outcry from the international clematis community and the Rector of the Jesuit College came to realise the esteem in which Brother Stefan and his work were held world-wide. The decision was reversed and the garden went on.

In March 2009, Brother Stefan was awarded the Commander's Cross of the Order of Polonia Restituta, one of Poland's highest honours; the citation translates as being "for outstanding achievements in the field of cultivation of ornamental plants and for his contribution to international horticultural advancement". Stefan Franczak died in July 2009.