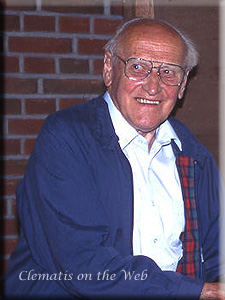 Photo © 1994 Ken Woolfenden
Magnus Johnson photographed at a meeting of the International Clematis Society in Hamburg, Germany, in 1994.

Magnus Johnson was born in Sweden in 1907. In 1931 he started work as a trainee gardener and it was at this time that his love of clematis started. Within a couple of years he had opened his own nursery, importing clematis from various countries, and it wasn't long before he started propagating and then breeding them himself. Over many years, more than 120 named clematis resulted from the breeding programme.

Amongst his career achievements he was Head Gardener of the Gothenburg Botanic Gardens from 1952 to 1960 and Landscape Architect for the City of Gothenburg from 1960 to 1972. In 1985, he was awarded the Grenfell Medal (silver gilt) by the Royal Horticultural Society for his gouaches of clematis.

In his last years he published in Swedish probably the most comprehensive book on clematis to date, Släktet Klematis; this was later published in an English language translation as The Genus Clematis. In 1999 he was awarded an honorary Doctorate by the Swedish Agricultural University and, in 2002, the Viech Medal by the Royal Horticultural Society for "his work in Sweden, especially with clematis."

Magnus Johnson was a founding member of the International Clematis Society and, more recently, one of its few Honorary Members. He died in April 2002.

Based on an obituary by Ken Woolfenden published with Clematis International 2002 by permission.