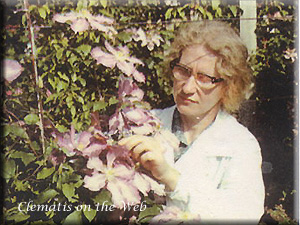 Professor Margarita Alekseevna Beskaravainaja was born in April 1928 in Usman which is in the Lipetsk region of Russia. She graduated from the Voronezh State University and went on to the postgraduate school at the Moscow State University. Professor Beskaravainaja worked for over 30 years at the State Nikitsky Botanical Garden in Yalta (Ukraine) where she met A N Volosenko-Valenis. The two collaborated for many years and, after his death, the professor took over the care of the clematis collection that he had assembled and the associated breeding programme; under her stewardship the programme was continued and the collection expanded Another part of her work was a collaboration with N G Chemarin studying the effect of gamma radiation or chemicals in hybridisation work.

Professor Beskaravainaja was a gifted breeder of clematis and her research into the species is an importany body of knowledge. She bred about 50 clematis, wrote over 100 scientific papers and authored four books. During her life the professor was awarded one gold and two silver Medals of Agricultural Achievement by the Soviet Union.

Based, with permission, on a series of obituaries in Clematis International 2004.

Note: readers researching the Professor's work will find that there is a range of spellings of her surname resulting from different transliterations of the original. We have used this spelling throughout Clematis on the Web.