Clematis on the Web
Tetsuya Hirota 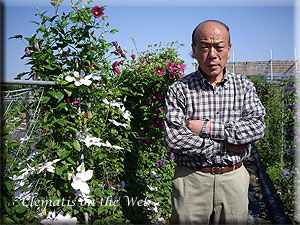 Tetsuya Hirota was born in 1947 and has been an engineer in the field of auto paint development for a long time. He has been enthusiastically growing clematis since he was in his 30's. He is one of the leading amateur growers of clematis in Japan.

He has been charmed by clematis ever since he first saw a pot of them blooming beautifully at his brother's house. He started to grow clematis from seed when he was in his mid 40's and his first success became commercially available as 'Yatsuhashi'. Later he produced numerous new cultivars: the most well-known is probably 'Fukuzono'.

He plants over 10000 seeds in pots and later he puts them in the ground. Then the selected plants are transferred to pots to manage closely. He organizes his plants by the year and numbers each plant. He selects the special plants and names them. Many of his clematis have been exhibited at the Tokai Clematis Conferences and Exhibits and Japan's leading clematis specialist, Mr. Hiroshi Hayakawa, whom Mr. Hirota admires as his teacher, introduced some of Mr. Hirota s original clematis to the world.

Mr. Hirota says that if a lot of seeds are planted, there are definitely some that would grow beautifully. However, managing many plants is getting to be a hard task so now he wants to concentrate on producing specific kinds that he likes.

He is eager to experiment in different ways to grow clematis and to try various methods to multiply his plants. He organizes his plants in detail and checks carefully the shapes of leaves that might be altered from the parent plants and put them separately. He utilises skills and technical approaches learnt from his engineering background to grow beautiful clematis plants.