Clematis on the Web
Szczepan Marczynski 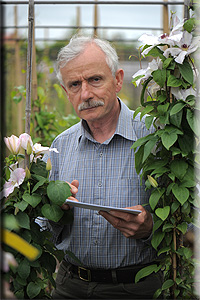 Szczepan Marczynski D.sc. was born in 1946 in Warsaw, Poland. His parents Janusz and Anna Marczynski both held M.sc. degrees in horticulture and in the 50s and 60s of the 20th century managed a state-owned 60 ha nursery of ornamental trees and shrubs near Warsaw. That was where Szczepan took an interest in plants. In 1969 he graduated from the Horticultural Faculty in the Warsaw University of Life Sciences and began work at the same faculty, in the Department of Ornamental Plants as a researcher and lecturer on ornamental plants, dendrology, plant propagation, and nursery stock management. He continued this work until the mid-90's, in 1980  1991 acting also as the chairman for the University's section of Trade Union Solidarnosc. In 1973 he defended his doctoral thesis and received the title of Doctor of Agricultural science. In 1977 he was offered a 1-year internship at Cornell University in Ithaca, USA where he conducted research together with Prof. Harold B. Tukey Jr., and in 1987  1988 spent 8 months at the Research Station for Nursery Stock in Boskoop, Holland, processing his own research project, and in his free time cooperating with two nurseries - Jan Fopma and B. van den Bosch.

Szczepan planted the first couple of clematis cultivars in the 70's in his private allotment but he took a serious interest in clematis in 1988 when he decided to establish a clematis nursery. He started the enterprise together with Wladyslaw Piotrowski on a 0.5 ha of a leased field in Jawczyce near Warsaw. The nursery developed and in 1995 was moved to Pruszków where at present it covers 10 ha and is a producer of clematis and other climbers, under the Clematis  Zródlo Dobrych Pnaczy (The Source of Good Climbers) brand. The nursery wholesales plants in Poland as well as in 36 other countries across 5 continents. The www.clematis.com.pl website provides much information on clematis, including video tutorials in 5 languages: Polish, English, Russian, German and Chinese. Szczepan is an author or a contributor of 15 scientific papers, 5 books (of which 2 are dedicated to clematis and other climbers) and over 100 popular articles. He has given lectures and presentations in many places in Poland as well as in the U.S.A., Canada, Japan, Great Britain, Ireland, Holland, Germany, France, the Czech Republic and Hungary. In search of new plants Szczepan has visited most of the European countries as well as the U.S.A., Canada, New Zealand, Japan, China and South Africa. Since 1992 he has also devoted time to breeding new cultivars. He raised more than 30 own Clematis cultivars: Beautiful Bride, Sweet Summer Love, Lemon Dream, Purple Dream, Diamond Ball, Krakowiak and Maria Sklodowska Curie to name but a few. Szczepan is a member of the International Plant Propagators Society, International Clematis Society (President in 2004-2008), British Clematis Society and The Polish Nurserymen Association (which he chaired in 1997-2000 and 2009-2012).