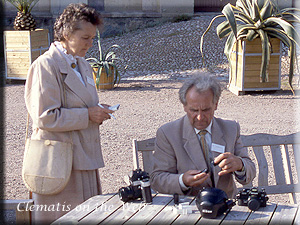 Vilhelmine Riekstina graduated from the Latvian State University in 1963 and went to work at the botanical garden of the Latvian Academy of Sciences where she worked for most of her life. During the 1970s she developed an interest in clematis not, at that time, a popular plant in the USSR.

Vilhelmine developed a clematis garden through which she experimented with ways to breed and produce clematis on a commercial scale. She went on to breed nine clematis commercially and was an important figure in developing a widespread interest in clematis in Latvia and beyond. In 1987 she was awarded a National Economy Achievements Medal in connection with this work which included growing clematis from green cuttings rather than by the traditional method of grafting.

In 1985 she published her first book on clematis (in Latvian), followed by a second in 1990 (in Russian and co-authored by her husband, Ilmars). Between the two books she authored a number of clematis-related articles and papers. At the time of her death in 1996, following the restoration to her of her family's lands, she was working with her husband to establish a clematis genepool collection in what is now the Laumas Arboretum.

Based, in part, on the obituary by Ilmars Riekstins in Clematis International 1998 by permission.